The Playboy Interviews: Movers and Shakers

Playboy has been packaging some of their most famous interviews together in a series of recent books, each around a central theme. The Playboy Interviews: Movers and Shakers centers around some of the most successful entrepreneurs and/or business leaders of the past 40 years, and it doesn't disappoint. While there's nothing new here, the collected interviews of major business leaders, stretching back as far as 1974 to as recent as 2004, is a treat both for its insight into what makes these people tick and the ability it gives us to see if the future played out the way the interviewees thought it might.

Most of the interviewees are larger-than-life characters, and these in-depth interviews bring that impressive aspect out. Perhaps the most entertaining of the subjects is Ted Turner, interviewed originally in 1978, fresh off of having won the America's Cup yacht race and taking over ownership of the then last-place Atlanta Braves. At the Braves' games Turner would sit behind home plate with a microphone tied directly into the stadium's public address system, offering his comments to the few thousand fans who attended Braves games at that time. Interviewer Peter Ross Range describes the constantly moving "Mouth of the South" as someone who never stops talking, continuing to yell commentary even when on the other side of a closed restroom door.

Interviewed five years later, again by Ross Range, Turner's fame had grown and he comes across full of stress over competing with the broadcast networks with the recent launch of his Cable News Network (CNN). Ross Range's somewhat aggressive questioning of Turner at this time leads to Turner eventually ripping the tape recorder from his hands, destroying the tape and throwing the recorder at the cockpit door of the commercial passenger plane they are flying on at the time.

The Steve Jobs interview takes place in 1985, and it is interesting to hear Jobs talk so accurately of a coming "information highway" and yet so inaccurately of the future of the computer industry - Jobs has Apple and IBM pegged as the only foreseeable players in the business; the rise of Microsoft is not yet even a blip on Jobs' radar screen.

The book's centerpiece is a 1974 interview with Hugh Hefner, followed by a second interview over 25 years later, in 2000. In the first Hefner is a relatively young man, still riding high as a trailblazer with Playboy, and loving every minute of it. In the second, Hefner is a 74-year-old man fresh off a separation with his wife and reclaiming his title as life of the party, extolling the virtues of Viagra and multiple girlfriends less than half his age. As you might expect, he was still loving every minute of it. Whether you admire or abhor Hefner, it's difficult to argue that he's lived the life of many a man's fantasy.

Movers and Shakers closes out with a 1979 interview with Malcolm Forbes. At first it seems out of place, coming directly on the heels of interviews with software kings Bill Gates and Larry Ellison. But in fact it's a great way to end a book such as this, with an unrepentant capitalist celebrating the wonderful life he's had the opportunity to lead and continuing to chase ever more interesting pursuits (including motorcycles and hot air ballooning). Forbes exemplifies what comes through in most all of these interview subjects - a zest for life and a desire to keep playing the game at the highest level. 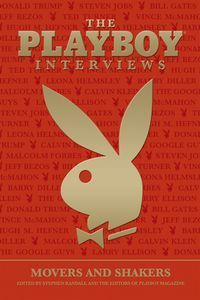